Coffee Shops - Maybe time to start giving my opinion on those I visit you know quality, care, view and atmosphere and how it effects the writing and doodling!
MZ
Posted by Unknown at 11:39 No comments:

In between major projects it always feels hard to focus on one. The large projects that are all simmering at the moment and vying for attention are sorting out draft 2 of MASANAGA a feature screenplay, a screenplay for Pure Bred Chihuahua #1 then two Novels Pure Bred Chihuahua #2 and I think the favourite is The Adolescent Minotaur another novel and while these are written and vying, THE GAPS an experimental feature is being filmed and slowly edited. I THINK I NEED TO FOCUS ON... The Adolescent Minotaur (check the spelling too) and leave the others until they need attention... Although i'll probably have the others continuing at 2 or 3% speed while the novel kicks off on hand written notepads... Then I'll need a change and one of the others may kick in... So espresso and thoughts on the Minotaur ...
Mz
Published with Blogger-droid v1.7.4
Posted by Zero Freak at 01:31 No comments:

Typing by a reading light in a bell tent as my two children talk about being best friends and Finn (6 years old) tell Indigo his little sister (3 years old) that he'll always look after her. Wow there were tears in my eyes. Now Indie is talking to me later than she normally stays up, tucked up tightly in her sleeping bag and playing with a mini wind up torch.. Becki my wife is walking round the bell tent at about 9.30 in the pitch black taking fotos of the surroundings.. Maybe its not pitch black .. God this is beautiful. We have a portable stove now and the possibilities for family travels are beginning to really sound exciting. I think a coastal journey beckons... Anyway a little blog or journal as we chat and swipe a daddy leg from my phone lit face.. Becki just called it a mummy long legs! Perfect. Now to sleep or read or something ready for tomorrow at the beach maybe a little more north!
Published with Blogger-droid v1.7.4
Posted by Zero Freak at 13:43 No comments:

DO we have to think now?

Quite odd thinking about thinking and the notions of revolutionary thinking and why the great, more transgressive literature seems to be stemmed by the great fears of terrorism and now thuggish non thoughtful riots that hold again fears of revolution by a mainly a-political point of view.
And so the more playful yet darkly hitting works critical of the norm, the status quo and materiality are more and more in the background and as it crosses my mind maybe the writers are even having to think before this very free flow writing is expressed and published. What might the work ensue or glamourize, if say made into a film and then seen by a wider audience? Accountabilty and transparency being the political buzz words at the moment as the world becomes more and more fearful over economic disasters and human corruption and the globalisation of all nations... moral fundamentalism is coming to the fore and religious fundamentalism and dogma is so particular and insular their answers are increasingly unusful but for those involved in their cause and their followers.
Radical thoughts for a freer, cooler, more kind society that is usually described by embittered pissed off dryly sarcastic usually wonderful authors who wish they'd been around when Easy Rider was made or that they were in at least one Kerouac truck or railway carriage, sit and write, and now do we have to actually think about what we say with an accountability in mind.? What an awful thought but I feel an atmosphere where any rockng of a boat might actually make it tip. So unstable and thoughtless have we become? Just a question really as I blab on... Argh big brother on channel 5 is starting!
MZ

Published with Blogger-droid v1.7.4
Posted by Zero Freak at 13:04 No comments:

A Small Realisation about PBC

Its taken a while but in a nutshell Pure Bred Chihuahua and future PBC books are about the war for Awareness, individually and in every dimension.. In and of which we are an integral part! I take a while to gather the big picture!

MZ
Published with Blogger-droid v1.7.4
Posted by Zero Freak at 02:01 No comments:

Working on MASANAGA at the minute a feature screenplay which is very exciting and also the next novel. A bit undecided which idea to focus on for the next novel or if I should try and write them both. There is the second book in the world of Pure Bred Chihuauha but also a another book that is totally unrelated but involves whaling ships, carnivals and hobo adventures by a mythical creature who also happens to be a 13 year old child in hard times. Hmm??

So just come off the phone with Matt my Publisher and it's time to check the proof for the first edition run.. Really Exciting :-)
Posted by Zero Freak at 12:11 No comments:

A very rambly Toos and Frows - of the Riots

Last night I had a mini epiphany, kind of to do with Nietzsche and his ideas on Will to Power and softer and more positive or realistic ideas of Empowerment and Self-Empowerment .. An epiphany to do with anyone who lives on a dangerous estate, or one where you need a certain attitude or bravado just to walk with your head high; why these guys might be doing some of these mindless things we've seen on the TV, or been afraid of, been barricaded against in the actual hot spots.. I have been pretty safe here in Huddersfield and I have had some friends who have been not so safe in the midst of the fires of London and I have felt the shame and anger as strongly as anyone.

I needed to ask myself some questions. Where can one feel empowered? What power? And where does it come from? And how can it be directed positively? And isn't it something we all need as humans, a power, an assurance of ones own strength and ability to live safely with honour, with the option of being heard? How can one say anything, be anything without the self assurance, and IMAGINATION to do something of worth!? With out these tools, living in certain conditions, and being of a certain character, what mindless expression will occur? This is not a lefty social get out, this is humanity... I am sad that such humanity is going to waste.


I have gone through anger and wanting the perpetrators to get all they deserve and more.. I'm possibly still of this mind, however I feel ashamed that it took me a few days to regain some humanity. The lack of humanity we label those creating such mayhem, havoc and fear.


Mayhem, Havoc and Fear. I don't have to use these as a tool to regain some power. I can hold my head up high most of the time where I live and not think, who's that looking at me? Am I in danger? Do I have to show some strength just to go to the shop? That must be exhausting to  live in fear or have to show feats of strength and intimidation constantly.


I am very lucky to have been given, or learnt the tools to imagine things to do. I don't need the government to supply me with basket ball courts and playgrounds, youth clubs etc etc to imagine a dream being fulfilled. How do we give these tools to the youth, and this is not just for those we so easily dismiss but to all those in school where statistics rather than inspiration within learning is so highly prized by the government and educational system.


I feel so very sad today as I walk around Huddersfield and see a few intimidating characters cycling around, big men on phones making out that things maybe about to kick off in town. That our police force may or may not have to deal with the situation, that innocent shopkeepers, shoppers, the innocent public may have to deal with fire, death, danger, havoc and mayhem, sneers, cajoling.


What I mean to say, what I find terribly sad is that when I see these intimidating characters I also see handsome men who could easily be models for Dazed and Confused or I-D Magazine, I see people organising this fucking mission of theft and/or intimidation, there are even strange talents of crossing physical social boundaries that are scary to normal people that could be useful in business and in the army and in the police force... there is humour and each individual behind the bravado and fucked up armour has kindness.... at least 98% do.


I am not saying we have caused this as a society.. I don't want to lay blame.


What is the answer?

Poverty, the word is bandied about and then you see fucking drought and true poverty in the 3rd world and the criteria we give to the word seems ridiculous. Objects & Materialistic poverty has nothing to do with this. It is the atmosphere of living in the world any human would hate to live in and having to get by. Bit by bit this would be soul destroying, character destroying to some and those it doesn't destroy, for those many trying to stick this out, how great is my respect to these people... and then there is this opportunity to stick 2 fingers up at the world and say fuck you, fuck off, we exist, and the mayhem and havoc and destruction is the two fingers. By these with lower character and lower strength and lower possibilities.

My Dad lived as a peasant in Calabria, 5 slept in a bed, my Granddad came from literally 3rd world poverty in the back streets of Naples (Napoli is often quoted as being near 3rd world conditions) and through imagining a different world, they left and started a new world. Without Imagination, visualisation we would accept the shit we come from and we would fight only the shit but still live in it, shitting in our own backyards as the short sighted did in these riots, without the thoughts of a grand future, without a reason! Without thinking themselves out of their situation or mind set. We are the only ones who can do this. It is our Power to change our perspective to visualise a different world and fucking go for it. I commend any who try. And I truly am in awe of any who deal with those streets day to day I would be fearful to walk down. 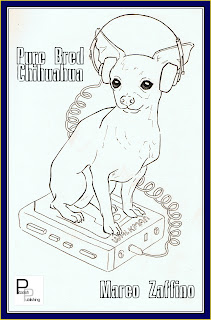 The cover designed by my amazing wife BECKI and the blurb is all wending its way to Matt Read at Pitseleh Publishing this very second!!!

Pure Bred Chihuahua is nearly there!!!