In Dialogue with Martin Herbert

PRE-PROOFED or EDITED for the Photography Book to be called -

and can be purchased at http://www.blurb.com/bookstore/detail/980655

Martin Herbert is a writer and critic based in Tunbridge Wells, Kent. His writing has appeared in magazines including Artforum, frieze, Parkett, Art Monthly, and ArtReview, where he is an associate editor. The author, most recently, of catalogue essays on Rebecca Warren (Serpentine Gallery, London), “Compass in Hand” at MoMA, New York, and Subodh Gupta (Hauser & Wirth, London), he is currently writing a monograph on Mark Wallinger, to be published by Thames & Hudson.

Marco Zaffino is a filmmaker and artist working from Huddersfield, UK. He has recently finished his 4th Non-Dependent feature film KINO and is presently working on a series of photography called 'The Epics'. His debut film "The Veranda" won Best Foreign Feature at the Los Angeles International Independent Film Festival 2002. He's written 14 feature screenplays and is editing his 2nd and 3rd novels with Matt Read, hopefully to be published in the near future. His sites: http://www.theveranda.co.uk/ and http://www.minstrelwalleye.co.uk/

MH - How did the Mannequin’s War project start? What were your criteria for casting the models? Where did you photograph, and why? 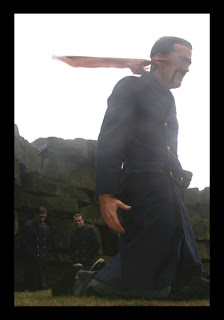 MZ - I wanted to place my models, symbolising ‘the beautiful people,’ ‘the younger generation’ of 2008/9 and obviously beyond, a generation now so involved in the more and more superficial networking cyber-worlds, into a world more difficult, surreal, religious, and with Mannequin’s War, dangerous. I wanted to put the models in a situation of terror and beatific realisation instead of looking at a facebook homepage. This massive friction between the ‘whatever’ reflection and the severity of such realities of war, makes a powerful gesture against our bland inclinations as pass times while we are fighting wars around the world and refugees are refused or begrudged asylum.
I took the photographs in the Huddersfield Moors, a special place for me, somewhere of incredible beauty and power where I do not feel a tourist. The Moors have become my studio. Like my studio, I used my friends as models. I seem to have a lot of good looking friends but like the Moors I love to work with these guys over and over again because you learn how to get the best shot and communicating is easier than if I worked with agency models and I also get a different look from non model models.
MH - What is the work’s relationship to fashion photography, given that it has something of a fashion-shoot look but nothing is being ‘sold’?

MZ - One of the negative factors that made me go ahead with this series was viewing the most banal, insidious and cliquey photo shoot in a pop culture magazine, where all was ‘sold’ and all meant nothing (I don’t want to mention this mag as normally it is pretty cool.) I wanted to put these people where they didn’t want to be; in war or prayer. So the fashion element was to put ‘fashion’ in this terrifying place. The shoot was styled by Jenny Killeen and the rituals of a fashion shoot were gone through, Hair, Makeup etc., the clothes were called out and the shoot should ideally be exhibited in a magazine, but I have no interest in selling clothes or pointing to them. The positive element that came from fashion was that some interest was paid to me by Dazed and Confused and Katie Shillingford (the fashion editor) and even though nothing came of it at the time, a trigger was released and the influence that a craft and the gloss of an image can make, crossing many boundaries, started a ball rolling, and I had to grow as a photographer if I wanted it to say anything relevant as an artist. The work has to be glossy enough to meet the viewer head on, and this aesthetic has to be of sufficient strength to veil the meaning long enough to cause a dawning and hopefully adding power to the interpretations.

MH - How do you see the correspondence between fashion, war and religiosity, since the models’ expressions walk a line between the beatified and the classical vacancy of modelling?

MZ - Beauty and fashion imagery let me talk to anyone who likes a ‘beautiful picture’ or looking at ‘beautiful people’… Behind that is an oddness or otherness that can be questioned, and there 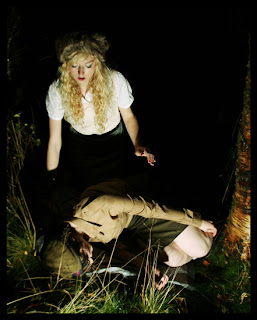 are more and less obvious lines of inquiry that any viewer can ask. Why is it fashion based? Why is there no blood or sign of war in moments of terror? Or in other photographs in this series: why is there blood with no visible reason for it? Fashion really is a grammar, like film can be, hitting quickly at an audience and so it is a tool to communicate superficially then hopefully a little deeper. .. Simply put though, I enjoyed making fashionable work, striking work. It is a quick fix after years of non-dependent filmmaking. Feature length films are wonderous beasts and very tiring.

MH - How does your project differ from works such as Steven Meisel’s ‘Make Love Not War’ (for Italian Vogue, 2007, a fashion shoot using the Iraq war as a backdrop)? And why did you choose an ‘historical’ aesthetic for your references to conflict?

MZ - Well to be mentioned alongside the man who influenced my Fashion aspirations so much, is a great honour. However working on this series and the ones alongside this made me focus more towards art than fashion. There are similarities, the intent and using fashion as a tool to express something against the horrors of war in a 'homeland' where we really don’t remember this terror. We fight on play stations in games where our grandparents still die, is such a grand disrespect to these warriors who’ve kept us free, died, been maimed, physically or mentally, right up to the strange wars of Iraq and beyond. The differences I would say are that my model warriors are more theatrically made up within a melodrama that is totally consuming them and they are within another world for a moment of terror. ‘The Scream’ or ‘The Minotaur’ show terrible and surreal situations that are giving the characters the most profound horrific and beatific experiences which seems to be the difference of the playful, hi-budget, beautiful and professional model experiences that are occurring instead of the fearful, tedious or aggressive experience, I imagine is actual. I am contemplating our present generation, who feel a lot when you are one on one with them but seem very distant or cut off from these incredibly deep moments, which feel passé almost, (again because so much time is spent in a web-based social networking existence) whereas the experiences of Meisel’s models are more ‘party time’. Make 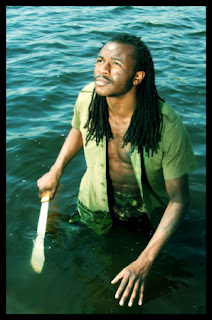 love not war is such a great thought if it were possible, but I am saying that I think we are a pretty shallow society too and can we make love and think a little deeper too? I’m a bit sick of how cynical we are towards certain depths.

MH - Are you interested in the slipperiness of status that your photographs have: that they look like they could be editorial photography, but are positioned as art? Are you interested in blurring the lines between commercial and fine art?
MZ - I designed them to be exhibited in Magazines and so I did want them to ‘slip’ in unnoticed. Yes perfect.- Then get noticed.
MH - Where was the Beat-Ific series made? Again, what determined your choice of models?

MZ - The Beat-Ific series was shot again in the moors and my dining room studio and sometimes at the end of other shoots as a collection of prayer poses, usually before a meal made by myself or my wife Becki amongst my children who I love to be there at these bizarre events or shoots. As a film director I love the domesticity of these shoots and what this can do to the performance of models and actors.
I began with a similar intent to Mannequin’s War but the more I worked with these people one on one, my cynical judgement, subsided and real spiritual depth was apparent. Some were friends I’d known for a long time, some were people I noticed and asked along and generally speaking they became friends too. 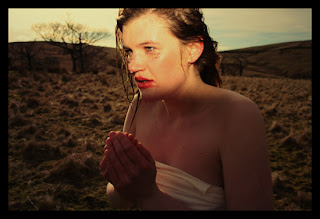 MH - To what extent are these ‘religious’ images?
MZ - They are extremely religious. They are my version of a renaissance moment of the Beatific and symbols of our depth as individuals and as human kind, yet again in a time I feel where this depth is hiding behind such strong barriers. But, I know Lao Tse thought the same as did Confucius and so has probably anyone passed the age of 25.


MH - Do you see a relationship between this work and classical painting? If so, can you articulate it? 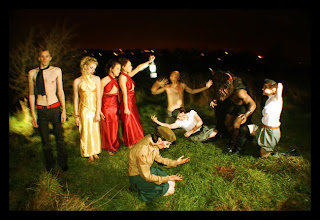 MZ - Absolutely, I have a painter's mind and a good deal of my foundation as an artist comes from painting, mostly of the Renaissance. I learn lighting from these guys, not from classical photographic studio lighting. ‘The Minotaur’ has hands pointing to corners, heads on an arc, the models are placed in quite a Renaissance composition and can be read in the way one would read a painting. The photos were designed as drawings, storyboards before setting the scene in the real world.
KINO, my 4th feature film was entirely lit by led torches to give a chiaroscuro effect inspired by late Renaissance painting and compositions were taken mainly from Indian Miniatures and Eduard Hopper.


MH - When these two bodies of work are shown together, a tentative narrative arises. Is that what you want? Are you interested in the idea of suggesting a storyline that doesn’t actually exist?

MZ - When these bodies of work are shown they melt quite smoothly as does the epics and new work to do with Warriors. The theatricality and filmic/painterly glossy look is a glaze that makes them all sit well together, sometimes I would prefer a clash. A narrative is unavoidable. If I did clash with say, my family photography, which is a possibility then another narrative would appear. I think it’s how we sort out the world, building narratives from anything we can and if that happens then a kind of microcosm has occurred within a gallery or magazine, which is cool. They are works in series too, shown together, and there is a bit of a story happening within the shoots. I try to exhibit them so that the story is not a linear one though. That would be a bit tedious.

MH - How does your photography relate to your filmic work?

MZ - I hope more and more, because I am much more naturally akin to photography and film is more an obsessive discipline. I’d love for my film work to grow more and more cinematographic and grandiose, and it is heavy on these qualities already. Reversing this, the experience in film-making has made me know the possibilities of photography and what one can obtain from non professional models and actors, and the great quality they can bring which is usually heart and not thirst for money or fame.